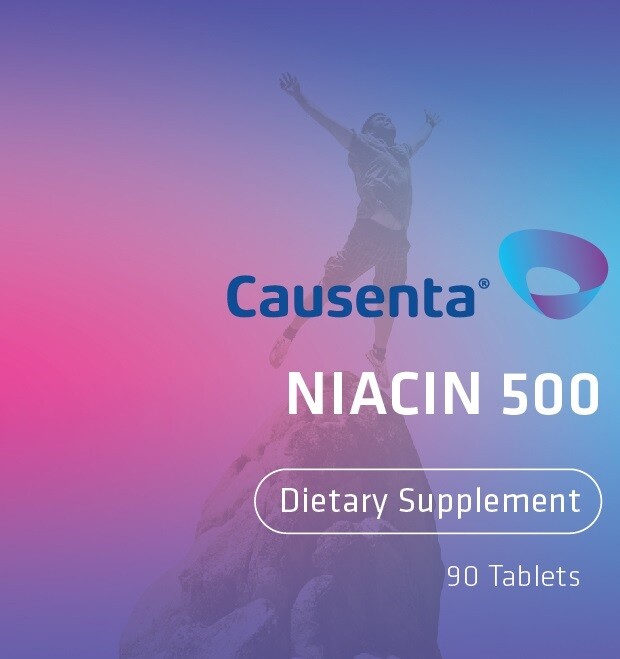 The cardiovascular benefits of niacin (vitamin B3) were introduced in the June 1956 issue of Mayo Clinic Proceedings. [1] More than 20 years later, the Framingham Heart Study touted the benefits of niacin on lipid metabolism. A decade later, as the study continued, researchers labeled niacin “front-line” cardiovascular support.[2] This status was further reinforced in 1988 when the National Cholesterol Education Program (NCEP) panel designated niacin a “first-line therapy” for support of specific parameters related to cardiovascular health.*[3]

Several mechanisms of action have been proposed for niacin. Various experimental models suggest niacin can modulate lipoprotein biosynthesis in the liver, inhibit the release of free fatty acids from adipocytes, inhibit synthesis of apo B, induce lipoprotein lipase, and help maintain the structure and function of HDL (high-density lipoprotein) by reducing the amount of apo A-1 broken down from HDL during hepatic processing.[4,5] In addition, when niacin is used with resins, it can stimulate bile flow and may therefore affect lipid biosynthesis.*[6]

Since the late 1970s, studies and clinical trials, lasting from four weeks to five years with daily doses of extended-release (also known as sustained/prolonged/slow-release) niacin up to 3000 mg/day, have consistently demonstrated niacin’s efficacy and safety.[6] In 2004, the ARBITER 6-HALTS trial clearly demonstrated that niacin offers targeted support of cardiovascular health.[7] Final results of this trial, published in 2010, further demonstrated that niacin supports healthy carotid intima-media thickness (CIMT).[8] While the supportive effect niacin has on blood lipids is well documented, there has been a recent focus by NCEP and other researchers on how niacin’s effect on HDL may influence cardiovascular events.[9] More well-designed studies that address innate limitations and are carried to completion are needed.*

The two common concerns are cutaneous flushing and increased liver enzymes. Cutaneous flushing is harmless, although it can be a nuisance. Flushing is most often seen with the use of immediate/ instant-release forms of niacin and can occur with doses as low as 30 mg/day, but it is more likely to occur with the much higher doses used to support healthy blood lipids. Flushing may last 10 to 15 minutes and rarely, but possibly, up to two hours. The proprietary wax-coated technology used in Niacin 750 tablets allows a gradual, sustained release of niacin over a seven-to-eight hour period. This delivery dramatically reduces the flushing associated with immediate-release forms. Adherence to a regimen with the special wax-coated form of niacin, as found in Niacin 750, ranged from 88-97% in four human clinical trials.[10,11] Flushing, itching, tingling, and upper gastrointestinal side effects were minimal, but did increase when dosing was increased to 2000 mg/day. It is important to note that Niacin 750 should not be confused with “no-flush” niacin, which is inositol hexanicotinate (IHN), a supplement that does not contain any free niacin and may not be as supportive of cardiovascular health as those providing nicotinic acid.*[12,13]

The second concern with regard to liver enzyme elevation was first elucidated by the results of McKenney’s study, published in 1994 in the Journal of the American Medical Association (JAMA), wherein subjects received 3000 mg/day of niacin over an extended period of time.[14] In April 2004, McKenney retracted his earlier warnings about the harmful effects of niacin and publicly supported its unique benefits.[15] Although they generally do not enter an unhealthy range, liver enzymes may increase when initiating niacin therapy, especially in amounts greater than 1000 mg/day. Enzyme levels return to normal promptly after cessation of niacin.*[15] Clinical Applications Niacin is one of the most studied and documented nutrients for support of lipid levels already within the normal range, especially high-density lipoprotein cholesterol (HDL-C) levels. Sustained-release niacin, as found in Niacin 750 750, has a lesser flushing effect compared with instant-release niacin. Use of a proprietary, wax-coated technology permits release that is complete in seven to eight hours, the time that is considered ideal for a time-release form of niacin.* *These statements have not been evaluated by the Food and Drug Administration. This product is not intended to diagnose, treat, cure, or prevent any disease. Niacin 750 mg 3750% Serving Size: 1 Tablet Servings Per Container: 60 Supplement Facts Amount Per Serving %Daily Value Other Ingredients: Vegetable waxes (rice bran and/or carnauba), stearic acid, magnesium stearate, and silica.

Directions Take one tablet one to two times daily with food, or as directed by your healthcare practitioner