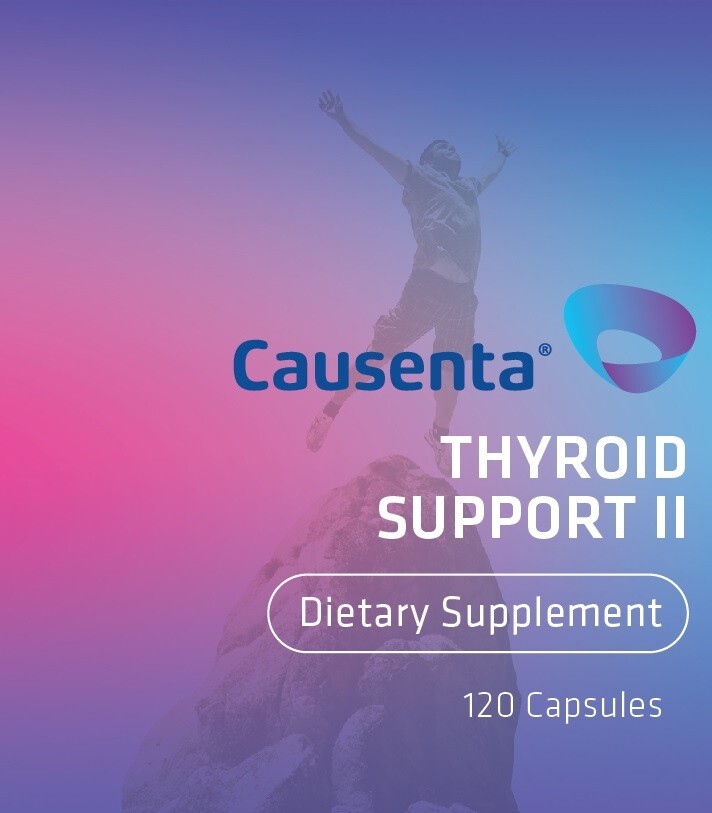 The thyroid gland, located in the neck below the Adam’s apple, produces T4 and T3 hormones that regulate cell metabolism. In this process, thyroxine is converted into the metabolically active hormone T3. Thyroid hormones are required for mitochondrial metabolism in every cell in the body. Therefore, a deficiency of thyroid hormones can affect virtually all bodily functions, including metabolic rate, reproduction, hormone production, and brain function, as well as musculoskeletal, psychological and cardiovascular health.1 Lifestyle factors, environmental toxins and nutrient deficiencies can negatively impact thyroid hormone production. A number of nutrients are required to produce thyroid hormones and to help convert T4 into T3. These nutrients include L-tyrosine, iodine, selenium, zinc and vitamin A. A deficiency in any of these nutrients can cause the thyroid to under-function. Heavy metals, such as mercury, lead and cadmium, as well as other chemical contaminants, can also block the conversion of T4 to T3. In addition, long-term stress can lead to increased production of the adrenal hormone cortisol. Excessive levels of cortisol can block the conversion of T4 to T3 and also increase the production of reverse T3 (RT3). RT3 is an isomer of triiodothyronine that competes with T3 at the receptor sites. Conversely, exercise positively impacts the thyroid gland by stimulating hormone secretion and increasing tissue sensitivity to thyroid hormones.1 (See Figure 1).

Thyroid hormones are made from amino acid L-tyrosine and iodine. Iodine is an essential trace mineral and is necessary for the synthesis of thyroid hormones, as it is one of the most important components of the hormones T4 and T3. The thyroid gland absorbs iodine from the blood and incorporates it into thyroid hormones. In addition to supporting thyroid hormone production, research shows iodine acts as an antioxidant, supporting a healthy thyroid gland and protecting a variety of tissues, including mammary tissue, the eyes and gastrointestinal lining.2 Normal thyroid status is dependent on adequate levels of many trace minerals for the synthesis and metabolism of thyroid hormones. The minerals zinc, copper and selenium are required cofactors for the enzymes that convert T4 to T3. Selenium deficiency has been shown to contribute to decreased T4 to T3 conversion.3 Supplementation of selenium can also help decrease thyroperoxidase (TPO) antibodies in thyroid autoimmunity.3 Supplementation with zinc has been shown to restore T3 levels in patients with normal T4 and low T3, demonstrating its role in the conversion process.4 Vitamin A and vitamin E are also necessary for normal thyroid hormone manufacturing.

Increased free radical activity can compromise healthy T4 to T3 conversion. N-acetyl cysteine (NAC), a precursor to the body’s master antioxidant glutathione, boosts thyroid health by accelerating antioxidant activity in the thyroid gland. In a randomized, multicenter clinical trial, the effects of NAC administration were examined in patients with low T3 and high RT3 levels. RT3 decreased in a time-dependent fashion in NACtreated patients, whereas no significant changes in serum RT3 levels were observed in the placebo group. Additionally, the T3 to RT3 ratio increased progressively in NAC-treated patients, whereas no changes were seen in the placebo group.5 Turmeric (Curcuma longa), along with the antioxidants vitamin C and E, has been shown to promote a healthy thyroid gland due to direct antioxidant activity. In animal studies, turmeric and these antioxidants were studied to observe the protective effects on thyroid health. In this study, rats that had been treated with a chemical that increased thyroid weights showed decreased T4 and T3 as compared to controls. In the treatment group, rats receiving vitamin C, E and turmeric showed reduced weights in the thyroid gland and less suppression of T4 and T3 levels. The researchers suggested that the positive effects of the curcumin, vitamin C and vitamin E combination could be due to the direct involvement of antioxidants in the thyroid gland. 6

Ashwagandha (Withania somnifera) has been used in Aryuvedic and indigenous medical systems for over 3,000 years and has been examined in research studies for its stresslowering effects.7 Ashwagandha has been found to exhibit GABA agonist activity, which accounts for its ability to relax the nervous system. Ashwagandha may also stimulate thyroid activity indirectly, via its effects on cellular antioxidant systems, specifically by increasing the antioxidant enzymes superoxide dismutase and catalase and reducing lipid peroxidation.8 In studies using mice, the effects of administration of Withania somnifera root extract (1.4 g/kg of body weight for 20 days) demonstrated an increase in serum T4 concentrations.8,9

The gum resin of the guggul plant has been used in Ayurvedic medicine in India for nearly 3,000 years. Guggulipid has been shown to support thyroid function, primarily by decreasing lipid peroxidation in the liver, the principal site of T3 generation. Guggul extract has also been shown to have thyroid-stimulating action by increasing iodine uptake by the thyroid gland and increasing the activities of thyroid peroxidase and protease.10,11 In animal studies using mice, the effects of guggulu, the gum resin of Commiphora mukul, were examined. A chemical that induced hypothyroidism was administered simultaneously along with guggulu (200 mg/ kg of body weight per day for 30 days). In this study, it was found that treatment with guggulu decreased lipid peroxidation while increasing the activity of sodium oxidase dismutase and catalase.1

4 capsules per day or as recommended by your health care professional.